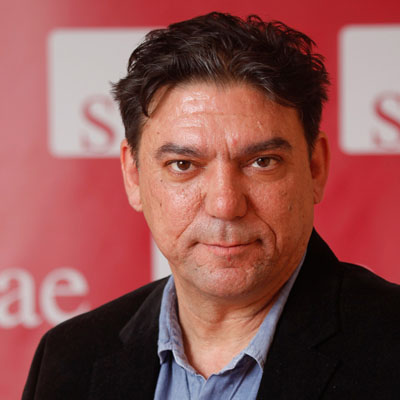 Antonio Ruiz Onetti was born in Seville in 1962. He graduated in Drama from the Royal School of Dramatic Art of Madrid. In the beginning worked as an actor in film and theater. He is playwright, film and television writer, stage director and professor of drama and dramatic writing. He has also directed two films for television and prepares his leap to film directing in 2013.

As a playwright has premiered and published all his works in Spain and some of them in other countries in Europe, America and Africa, translated into English, French, Portuguese, Arabic and Romanian. As a film and television writer specializes in bringing to the screen real cases and historical characters, as well as all aspects of telenonela script.

Some of his most notable works are : Madre Caballo, La Puñalá and La Calle del Infierno (Theatre), Lobo, GAL and Operacion E (film), Padre Coraje and Los Ultimos Dias de Franco (miniseries): El Super, Calle Nueva, Plaza Alta (telenovelas). Since seven years ago, he collaborates as a screenwriter in Amar en Tiempos Revueltos, TVE daily series which is also one of its creators, 2008 Ondas Award-winner and 2009 Fotogramas de Plata and with over 1500 chapters broadcast.

Currently, is the President of the Fundación Autor of SGAE